What I write when I'm kinda all over the place...random seems to fit.

1) I have a favorite sports writer which is really quite hilarious since I'm such a sports enthusiast in general...r i i i g ht! Rick Reilly. Love him! Lovehimlovehim...LOVE....HIM! Tad doesn't mind, he likes him, too. Doesn't matter what he's writing, he "has me at hello". Guys read Playboy for the articles...I read Sports Illustrated for the last page ('cept I'm telling the truth). Click around his archives if you haven't read him before; if you like humor, you'll have a new crush, too. Here's a glimpse into his dementedly delightful mind. Far from one-dimensional, however, when he has something more serious to say, he does so with reverence and respect but equally engaging (like here). Hope you can click those links without a SI subscription, if not, you can still check out the old archives. 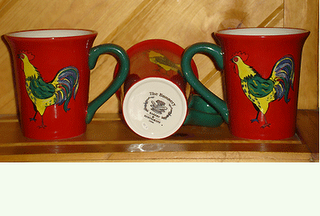 Here's my cercie (how the heck do you spell that?) from Tad & Rachel's trip out west :)--my NEW favorite coffee mug!!! They picked it up at
The Bunnery, what became their favorite breakfast place. Tad had seen it on $40 a Day, and predictably, Rachael Ray was right on the money with this pick. The boys got tee shirts, but I must say, mine tastes much better!

3. I'll share some of their pictures soon, new camera, figuring out the transfer, it makes me think of my first post. OMW, I'm grinning right now! Sometimes I DO pine for a chocolate/vanilla/strawberry kind of world where I don't have sooo many choices! Like NOW, where this camera is concerned. Gotta get through a daggum college level course to take advantage of all its features. Later.

4. Lance Bass, raised as a Southern Baptist and former *NSYNC boytoy, has just publically "outted" himself. I was scanning the People magazine cover story last night while in line to get our NEW 19" flatscreen monitor (waahooo--gotta LOVE THAT kind of a sale!), and somewhere in there, he commented on how he used to respond to band members (others? can't remember) when they questioned him not taking advantage of the hot groupies who chased him. He attributed his ability to resist to being a "good Christian boy". Gee, what to think about that :/.........

5) My boys are barbarians even if I sissy out on occasion. Here they are riding Goliath, an amazing thrill ride and artistry in adventure if there ever was such a thing...it's pretty!

At nine, Stephen was the surprise--he was scared of nothing. I DO think both boys were fine with Deja Vu being down. A lady in another line with us explained that two people had heart attacks riding it and she thought a small child fell out once...since I didn't see the press on that, I figured it was a Six Flags urban legend. I don't know what started the trend in pretty roller coasters, but all the new ones were colorful, attractive...and seductive. But, no, after falling into temptation once, I resisted their disceptive allure.

I not a sports fan, but my husband is, and he often shares Rick Reilly articles with me. I also don't mind watching highlights or ESPN, and actually enjoy the Sports Reporters. Just not the sports.

Girl you are all over the place today - slow down....you are making me tired...LOL

dang - couldn't read Reilly - not a SI subscriber, not that my husband wouldn't mind getting it (but who needs one more distraction, right?)

If I'm ever in Jackson Hole I will eat at the Bunnery...looks yummy!

Click the first Rick Reilly link, you should still be able to read the old stuff which is just as juicy as the new....

My boss, a woman, reads reilly regularly... the SI is always on the breakroom table.

I'm headed for bed and it's only wednesday night.

I have loved rollercoasters, but the last time I visited Six Flags, I blacked-out (but was conscious the whole time) from screaming too loud. Need that oxygen.
Love the "about me" - can relate with the reading and nonshopping and laughing. Love even more your pic. My favorite pic from our honeymoon is of our feet overlooking the ocean.
Tell me about the Blogging Chicks roll. Beautiful blogging babes?
FYI: I posted my disappointment about the Carnival of Beauty on my site this morning.
I'll be visiting here more often!