Why two parts? Because I know y'all. You won't read long blog entries. So, you get two for the price of one today.

Last night when Tad got home for work, we headed back out to get a new car battery and to get some dinner (his "seven-year" battery unexpectedly dying in only five years is in keeping with my "slightly-organized-chaos" life management style) .

We had to get on the interstate to get to where we were going...and maybe 200 yards on it, we came to a dead stop. We knew we were in trouble when we saw a cloud of dark, thick smoke maybe half a mile ahead. This was about 6:45 p.m. No one was going anywhere.

When this happens there's a delayed reaction. At first, you think, oh, things will get moving in a minute. When you hear, then see, emergency vehicles finding a way to get to the scene, you realize it just happened...they haven't even started on rescue. 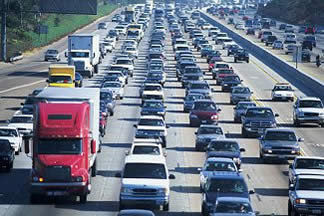 Oh, yeah, and the smoke.

So...your evening is thrown a few lemons...do you sit and pucker or make lemonade? :) After initial irritation, we made lemonade.

I ALWAYS have a bag with books & stuff in the car...but we cleaned out the car, so it wasn't there. THAT ended up a being a GOOD thing, because if I had had it, I would have read. The only book in the car was a Dietrich Bonehoffer book, no way I was going that deep with a car full of monkeys! So, these were our lemonade "ingredients":

- First, we tried to get a traffic report on the radio to find out what happened. Found out they don't do reports at 7:00 p.m.

- Everyone (but Tad) hung out the roof of our van. Cars honked...people waved (mainly the people in the OTHER direction who were having a religious experience & praising God because they weren't on OUR side of the road)

- Drank some bottled water which has been in the back of my car for a while since I keep forgetting to take it inside :)

- Since it WAS dinner time, the kids scavenged the Tic Tacs and Breathsavers I had in my purse.

- We traded seats in the car. In the process I was standing (crouching?) in front of Thomas and he squished my thigh...
n i c e...he told me he was scarred for life.

- Tried to get a few "car games" going, but somehow that didn't work out...something about cabin fever...we started several, but didn't complete a one of 'em.

- I tried lipstick shades I've never tried before but have carried around anyway. No wonder I haven't tried 'em...!

- I FINALLY double-french braided Rachel's hair. I'm not good at this...so I don't do it often...she's been asking and asking, and all of a sudden, we "found" the time. I told her she had secretly caught the car on fire to stage the whole scene so I'd be stuck with nothing else to do but braid her hair. IT WAS STINKIN' ADORABLE!!! I'm really pretty bad at it, but it ended up so cute, I'm kinda convicted to make time to do this whenever she asks...shhhhhh! Don't tell her!

- Tad, FOR THE FIRST TIME EVER, played Stephen's Nintendo DS:). Y'all have no idea how BIG that one is! He hates that stuff!! He wanted to play the boys' PSP (cause it has WAY cooler graphics, per Thomas), but it was dead and Thomas forgot the car adapter.

- We talked to the people around us (by "we" I mean "I"). I wanted to stroll up and down the parking lot, I mean interstate, and "poll" people (not sure what my questions woulda been), but Tad nixed that. Thomas insisted we had drug addicts in front and behind us because everyone in those cars was lighting up. I guess sitting in traffic makes some people edgy, lol.

We were thankful it wasn't as hot as it has been because sitting that long with the car running and the a/c going woulda cost, what? $20 bucks these days? Mostly, we were thankful we weren't involved in whatever the accident was...it could've been a whole lot WORSE! :(

Finally, almost an hour later, we turned the car around and went backwards down the interstate, back down the exit ramp (cars had been doing this for half an hour before we decided to follow them and "jump off the mountain b/c everyone else was doin' it"). The on ramp was closed, so it wasn't like we were going to get into a hot game of Chicken (of course, we didn't know that 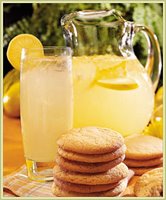 til we got there). We were able to get a new car battery 10 minutes before the store closed, enjoy dinner at McAlister's, savor a carmel macchiato at Barnes & Noble, and run into a friend from SC (!) while checking out new books.

All in all, a good night. Attitude was everything. And, really, I was pretty proud of my kids for swimmin' not sinkin'.

Hey, I made it into your blog;) Glad to reconnect with you guys! Sounds like your family is well prepared to make the most of future traffic frustrations...:)

ha ha! loved the article! you said you'll do my hair anytime now? (puppy dog eyes) i love you me-maw!

aww! that actually sounds like some great family time!

I love how you made it a fun and positive experience:)

"fun in a traffic jam" 101 things to do while you wait! This is why I like to avoid the freeway

What a great lesson, to teach your kids how to make the best out of a frustrating situation. No doubt this is a memory & a lesson they'll remember & try to pass on to the next generation.