After our whirlwind romantic getaway, Tad and I parted company. He headed south to God's Country (a.k.a. Daufuskie Island) to enjoy his guys' annual golf thing. I headed home to the real world.

Ahhh, but a treat was waiting. I took my kids to see eleventyseven, an up and coming Christian punk rock band (don't cha just LOVE that??? Gotta tell you, it's cracking me up to think this is the first time several of my friends will hit a myspace page ;) all I ask is that you give 'em a chance!). Thanks to friend Mr. Potato Chip for hookin' us up with tickets and backstage passes (I use the words "tickets" and "backstage passes" very loosely here, and if he reads this he will quite possibly LAUGH OUT LOUD!!!)

Ok, so some funny stuff here. First, this wasn't Rachel's & Thomas' first concert, but it was for Stephen (he's 9). They absolutely didn't seem to know "what" to do with themselves. I wasn't even sure if they were having a good time, but I know they LOVE the band because we've listened to the CD about 4,372 times. Me? Dang, I felt OLD! I WANTED TO JAM W/THE BAND. I mean, in my head, I'm age relevant. In my body? Well, let's just say it would've looked rather sad and pathetic.

Second, at one point I stood behind Stephen and kinda leaned my forearms on his shoulders. In my mind, I'm "reassuring" him 'cause he kinda had that "deer in the headlights" thing going on. He said something and I said "What?" and he repeated loudly, "Mom, don't hang on me in public........!" (I was crushed, lol...he IS my baby, after all).

Third, band member Caleb saw us back on the bleachers (the venue was one of those multi-use Youth spaces, kind of gym-like) and said "Hey, you, little girl in the red shirt, come up and talk to me...and bring the rest of your group with you." Of course, I jumped down and headed for him (the rest of the crowd was pretty much jammin' in front of the stage), and my puppies dutifully followed. Caleb said, "Cool...someone actually doing what I tell 'em to," as I started to move; halfway up, I thought better of it, and went back to the floor. Thankfully, the band never saw me.

Fourth, after the concert, Chip called us to meet the guys "backstage". OMW, Caleb I think was MORTIFIED when he realized I was the one he called from the bleachers...A MOTHER??? A MOTHER???! But, it was cool. My kids once again didn't know quite what to do or say and the guys graciously posed for some pretty cheesy pictures. But, all three bandmembers were n i c e to my kids...I guess they aren't that far removed from their ages.

We all came home with el 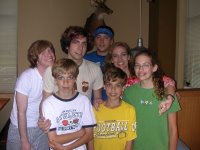 eventyseven tee shirts--my part in getting their name out there and supporting the band (since we got in free). And I learned two things: next time I take my kids to a concert, I'll hide in the back and let them bring some friends (so they can loosen up and have FUN without their mommy), and two, according to Mr. Chip, Thomas needs to learn how to play the guitar 'cause that's definitely how you get the girls (T would argue it's not necessary).

You rock Hot Mama! Without knowing it, you just got hit on by a dude in a Punk Band. A Christian Punk Band. Don't know how all that works but whatever works for them and their groupies. I think that's AWESOME! Rock on Robin. From now on, you are to be called Rock'in Robin!

Mavrick, you're just missing me 'cause it's been too long--a compliment??? I think y'all must've had some very special liquid refreshments before you posted--you can't even spell your name;). Of course, I'll STILL take the "hot mama" comment (even though the truth is I'm old enough to be the guys' real mama!)

Anony, yeah, once again, an "anonymous" post-er who is ANYTHING but anonymous!! Glad you stopped in :) And CAN'T WAIT to see the link to 11T7's video clip!

"Hot Momma", "Rockin Robin", you took your kids to see who at the what and are listening to something called "punk"????? definitely not a REAL baptist momma! and well your passport to hell just got stamped again!!!!:)

Shelly, you forget I took a picture of you this week and it will be uploaded to cyberspace soon :) :) :). Thank you for the COMPLIMENT! Please tell me if I EVAH look like a real baptist momma and I'll ... get that taken care of (wish you could've read what I wrote before I erased and started over;) ). How many "stamps" am I up to now? Not sure I can count that high.

well how cool is that?:)

wait!!!!!!!!! I think we all skipped the 'Thomas doesn't need the guitar to get the girls'

God "blessed" me for biting me tongue
"Paychecks"
Bloggers are just obnoxious
Made me smile, so it's blog-worthy
A conversation with Thomas
I can stay in Tennessee now.....
I guess something's wrong with me
Is it obvious?
Ah, ha!
Since my kids are testing this week...