Boys will be boys...

...and sometimes they surprise you. Pleasantly so.

A few weeks ago, we took Stephen and Rachel to one of our favorite "happy places". Tad and I were sipping a little not-necessarily-Southern comfort while reading the latest and greatest (meaning I don't remember now what we were reading then). The kiddos were mining treasures of their own somewhere nearby. How much do I appreciate that they enjoy this kind of outing as much as we do?!

Stephen had to make a trip to the bathroom, and upon his return, he had a very happy gleam in his eye. Not only did he find treasures galore in the bookstore, he found a five dollar bill on his trip to the loo (for the record, no, I have never used that word before-ha!). This is the kid who used to lay prostrate on any--EVERY--store floor, cheek grazing unknown-disease-laden linoleum, expectant eyes probing the darkness underneath the cashier's platform, silently praying to the grocery store gods that he'd find "silver money". Even at the age of four he understood that would do more for him than copper. Now, a fourth grader, he no longer hits the deck, but always has an eye cast downward "just in case". This time, it paid off.

He knew what he had to do, he didn't even question it. We walked over to Customer Service, explained what he had found, and in spite of the confused looks we received, turned in the bill to lost and found. Honestly, as the mom, I was disappointed the CS rep didn't praise him, but then again, he (we) didn't do it to be praised. He understood how he'd feel if he lost $5, how he would hope someone else would do the same for him. He got lots of affirmation from me on the ride home.

About two days later, Thomas was at a middle school football game; it was the afternoon of Rachel's birthday, so the rest of us didn't join him (she certainly didn't want to spend her birthday doing that!). When he got home that night, his adrenaline was flowing--great game (a buddy caught a "b e a u t i f u l" touchdown pass!), a blast with his friends, and sounding like he was on a caffeine buzz, he excitedly and animatedly (the way Thomas lives life) observed, "I've been at school 13 hours today!"

Thomas went on to tell me that he had found a $5 bill on the ground at the game. I asked him if he bought a bunch of junk with it and he said, "Of course not...someone lost it...I turned it in to the concession stand." [**heart swelling, now**]. He's 12. He could've bought enough junk to rot a tooth or two (as if he had any to lose!). And without us there to guide and direct him, he made a difficult choice.

How bizarre that within a few days of each other, BOTH our sons found five dollars? It's doubtful that the rightful owner ever claimed the money in either instance, but somehow I believe both boys gained much more in those decisions than they would have had they bought something; something that by now would have been long forgotten.

And I received an incalculable mommy-paycheck:).

Quote under picture: The soul is dyed the color of it's thoughts. Think only of those things that can bear the full light of day. The content of your character is your choice. Day by day, what you choose, what you think and what you do is who you become… 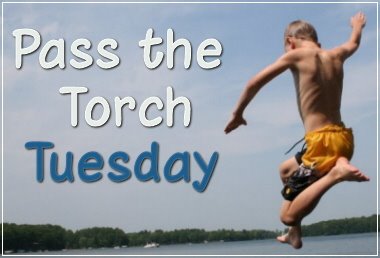 Kelly got me thinking about writing about this, she's a thoughtful blogger who has much experience working with kids. Visit her at Pass the Torch--you'll want to return again and again!

This comment has been removed by a blog administrator.

That's a great story. You must have been so proud of your boys for making the right choice.

I'm thrilled you joined us for Pass the Torch Tuesday!

That was beautiful. And what a coincidence about 2 $5 bills, wow.

Congratulations to your boys, and I love your "mommy-paycheck" phrase. Yes, the best mommy paychecks are free.

Kudos to your kids! And to the mommy and daddy who taught them honesty. And to the God who influenced them.

I really enjoyd this post for several reasons... "mommy paycheck", Pass the Torch info, the caption, and clicking on the links, BUT especially the story about your children and their honesty. Thank You !
I'm trying to learn how to link to one of my earlier posts.

Treasure be th' best thin' in th' world.
Be yer sons crazy ya lily livered scallywag? What kind o' pirates you turnin' out?

C'mere me fellow blogger and foller me to me pirateglobbership. Me hearties to see what crawls outta the bunghole...oh, it's me grog and lime soup. Specializing in mayhem and madness at me glob where the beatings will continue until morale improves
AARRRRR

My pirate friends are crackin' me up (that, paired with a nice Riesling). Y'all are too stinkin' cute :).

Welcome to Pensieve's "newbies": knitting maniac & mom2-3;) (hope y'all will come back now, ya hear?

But Karmyn is slap crazy!

In answer to a comment on OUAB, I read your blog everyday, I just tend not to comment on Christian related posts for fear that I might offend someone. Also, you should know I do tags (occassionally), you have tagged me in the past!

This post is similar to one I've been mulling over for some time now (I can't believe how many of my posts you inspire!) and will probably write very soon. But for now, let me say that you are 100% correct in saying that the reward is the feeling they get from doing a good thing.

Geez, WT, I'm blushing...you're blowing all kinds of air up my skirt :D

You're pretty reasonable...AND articulate. That just means, even though you might not agree with me or subscribe to my beliefs, you're worth listening to ;). I'm just glad you stick with me when I'm God-blogging. I'd be curious to know what you think about some of them.

What a wonderful post! And what wonderful sons you have. This made me feel so positive.

That is really awesome!! I can only imagine how proud you are!

Good for them and for you!

What a good Mom you are to have boys of integrity!

The incalculable mommy paycheck...I love it!

That is really great about your boys! Integrity is needed more around the world.

But, you have taught them that if they find a bar of chocolate somewhere they should immediately give it to you, right?

What a sweet story. It sounds like they got much more than the $5 could have ever given them.

A thousand congrats to you mom and your boys! Thanks for taking time to share. ;o)

This is totally cool!!!!
Did you realize that I just spend 30 minutes on your blog. I should come more often than once a week *grin*.
Have a blessed night - better get dinner ready for hubby and I.

Neat post, neat Mom AND a neat bunch of reader/commentors. Way to go Robin... you're a darling on both sides of the God fence. *-)

That was so great, and so well written. Good kids you have there!

Wonderful story. Wonderful boys (that must reflect on wondeful mothering). I wonder what they do with that cash?? Hey, maybe I'll learn a lesson and start just checking at the lost and found for money. Someone's gotta claim it.

Also, my 8 year old daughter now appreciates the trip to the happy places as well, which is SO awesome. Dh and I love to just book browse.

Thanks, guys...the boys loved the spotlight, and I guess the post and YOUR COMMENTS was an incalcuable "doin' the right thing" paycheck, too.

Welcome, again, Holly, and Darlene, GLAD you stopped by.

Jennifer, we could double date and never say a word ;).

How blessed you are to have such thoughtful boys, I bet you get a twinkle in your eye when you think, "I made that!" :O) Congratulations on you award for Perfect Post.

Beautiful story! Congrats on being such a wonderful mother and for your Perfect Post Award :)

For Tad
I'll deny it if you repeat it, but...
Screwed up system
In good company
Wanna new look for your blog?
Two Hundred
The Real Mary
I love a tall caramel macchiato breve but despise ...
It's a Whole New Ballgame
I'm not even sure what to think about this one...