I love it when I'm wrong

This past weekend, our church had an "in-town" youth retreat, I think the first time they've done something like this. Teaching for the weekend centered on "forgiveness". The format included both corporate worship/teaching with all the kids on campus AND small group sessions in host homes.

Although we had volunteered to be a host home, our daughter, a middle-schooler, stayed with a group of girls elsewhere. Thank goodness she had the insight to ask for this, intuitively knowing she'd "do better" without us around. When I had offered our home though, I thought it would be to have a bunch of middle school girls........instead, we had 10 girls, 8 of them highschoolers, the other two, post-college leaders.

Ya know, that kind of unnerved me at first. I didn't know ANY of them. I stereotypically assumed they would have absolutely no use for me and that they'd be "closed", cold toward me as some "mom" they had no relationship with. Still a relative newcomer to this area and our church, I lamented how different it would have been had this been our former church where I knew just about ALL the youth--I remember when most of them were born! I knew their moms and dads and their behind-the-scenes "stories". I knew the clicks...personalities... reputations.

So when I walked into the fellowship hall for the kick-off dinner, I froze. Right then, my cell phone rang--Erin, one of my FAVORITE SC girlfriends--and I must say, the call couldn't have been more timely!! I told her I was freakin'. That I was in a sea of STRANGERS! That I had made soooo much progress in establishing a life here over the past 2 1/2 years, only to feel like I was at square one...AGAIN. LOL, she knows my flair for the dramatic, she knows me well in general. She spoke reassuring words, words of truth, not the "lies" I was believing at that moment. Great encouragement, telling me that God had purpose and intent not only for the youth that weekend, but also for me.

She was right. My "feelings" were wrong. (I never trust them, anyway; I've been around long enough to realize feelings are among the most vicious of lies we're often goverened and motivated by......often leading to painful consequences). That night I sat in on their "home" session. It was late, so after chattin' a little, I was headed for bed. But THEN, the conversation shifted. Somehow, a door was opened and several of the girls started talking WITH me. Interestingly, about their relationships with their own moms. They were rather candid and expressed the desire to be able to talk with their moms but felt like they couldn't. I'm a mom! I wanted to know WHY!!

And so the conversation went...they offered insight into the mind of a 16-year-old. They were responsive to my questions, and even to me playing devil's advocate a bit. I think it'll be helpful to me as my own kids get to that place. It was refreshing how much the girls wanted to talk (I guess that's not a s t r e t c h for ANY girl, but they were open...not closed, as I assumed). And the experience might just be drawing me to lead a group of girls, something before that weekend I had not been drawn to in years.....

And for the record, on the wild & wacky video scavenger hunt on Saturday afternoon--ou 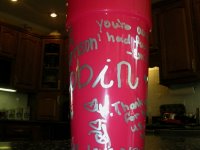 r girls WON!!! (and so did the middle school group I drove). My cup runneth over ;) ---> that's a "souvenier", personally-autographed, limited edition cup the girls hand-crafted for me...well, actually they all signed each other's cups, but they made one for the housemom, too.

I'm wondering.........have you seen any of those girls in passing at church since then? More recognizable faces. Yeah!

Were you bloggin' in the middle of the night???? NO way to stay "on task" mon amie! Yes, in passing (they even speak)...yeah, in cyberspace...but I'm thinking maybe a summer study (if they're interested). Can't believe I'm even saying that, lol.

this is a neat opportunity you had.

are you going to do it again?
I'd love to try something like this with our youth. This is just one area of frustration for me -- we're new, too & every time we try something different, I hear "WE never...", "WE always..." you get the idea.
I think I'll draw up a proposal & see how it goes -- after all, it's for the kids & families.

Loved it! I can so relate!