...loggerheads to the sea
...a moth to light
...flies to honey
...lint to ANYTHING black
...Britney or Paris to the tabloids
...chocolate to my hips

I was inexplicably but undeniably drawn.

Without realizing it, I had acted as judge and jury to convict them of a crime of my own construction. They were doing something I'd never do, and because of that, I was somehow superior, better, without "sin" of my own. With a swift finger of accusation, damning and full of ridicule, I had failed to see the three curled back, pointing at ME. All it took to discover this ugly sneer on my own face was to see their faces, learn their names, hear their reasons.

And have a whale of a time in the process :).

Guess what I did last night? I met the "campers" at Targét. If you've happened to read comments from my last two posts, you might've realized it already.

I didn't actually make a special trip for this purpose; Tad needed some things. But when the door of opportunity presented itself, well, I just charged through....MUCH to the mortification of my family.

With Rachel's trusty journal in hand (she's evidently more Nancy-Drew-ready than me), as my family bolted to the farthest-most corner of the store went inside, I sheepishly and reluctantly boldly and daringly marched up to the first set of campers and introduced myself (pictured here, left-right, Rocky, Jonathan and Joe). I told them I was taking an informal poll, and asked if they'd mind answering a few questions. Although the media has extensiv 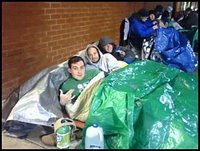 ely covered the peeps camping out for Playstation 3s in our area, no one had yet spoken to this group. I even heard CiCi's Pizza was delivering a few pies to line-waiters elsewhere, these poor guys got nothing but waterlog and frostbite (sorry, giggles that NOW the temperatures decide to hit near freezin'). Oh, yeah, except eventually their PS3s.

Of the ten people waiting in line, eight were guys. All but one planned on re-selling, that guy was a serious gamer. I didn't get his name but referred to him as "Camo Boy"--his face was covered in a hunting mask. One younger guy, David, planned on playing for a while, then selling it before Christmas (guess that's his version of the "best of both worlds"). Another David, also known as "Wedding Boy", was buying his unit to resell in order to make money to pay for his wedding. Gosh, he was so excited. When he told me they had a March wedding date, I asked when (my birthday is in March and I thought it'd be cool if they were getting married then). It's planned for mid-month, and when I told them why I was asking, one of the girls, Amy Grant (not THE Amy Grant-Chapman-Gill) said, "No way! That's MY birthday!" How cool is that? Ten people in line, 365 (or 366, Willowtree) possible birthdates, and one is on MY birthday.

These campers who I had dissed so easily before, were decent people. Why did I assume they were jerks? I didn't even realize my assumption until my pleasant surprise in finding all of them warm and open and inviting and eager to talk. LOL, they wondered if I was a reporter, and I just said no, I was writing about this for personal reasons, that this "story" (which really isn't much of a story) was intriguing in a trainwreck-watchin'-kind-of-way to me.

I gave a few of them my blog name and told them to Google me, not really expecting any of them to remember. How cool was it this morning when I checked emails to find Joe's mom, Loree, had posted a comment...and then later, Joe himself?

For some reason, this slice of an insane Americana was telling to me. Telling of self...and others. It was a nice lesson in not marginalizing people, seeking and seeing good in others, giving people the time of day. Contrary to what I've taught my children all their lives, TALK to strangers! We are ALL desperate for community, whether we know it, acknowledge it or not. For 2-3 days these campers were part of something much bigger than themselves...a phenom that can only exist in a country as indulged as ours...but for them the experience will be like Joe said, "time well spent [perhaps earning $2,400 for three days "work"] , and a fun story to tell friends."

Get this: I'm STILL doing "it"! While I sit here and write, in my mind, I'm thinking, "This is more telling about the people who will fork out $3,000 for these things then the guys reselling them". Geez, I'm STILL a judge!

I wouldn't camp out for the thousand bucks it costs to buy a PS3, much less for a PS3 itself. ;)

Ahh, Robin, they were waiting so that they could profit at someone's expense by making them pay more than necessary for a P3...they are jerks. You were right the first time, just because you spoke to them doesn't make them any less so.

And just by the way, statistically, if you have 20 people together, there is a greater than 80% probability that two of them will share a birthday. Weird I know but I learned that when I studied statistics as part of my degree.

Steven, I am just so proud of you for not talkin' about your body parts in my very PG-rated blog (b/c my kids read it...). ;) (I've seen ya around (your comments, not the afore-mentioned body parts.....!). Thanks for the visit.

Peter, you were typing while I was typing, so JINX! You owe me a coke or w/e the equivalent is in the blogosphere. But, I would beg to differ. It's supply and demand all over again. Can you blame them for getting paid for their "work"? Don't get me wrong, as a consumer, it's frustrating to witness this artificial, orchestrated hysteria? hyped demand?? Engineered product shortage??? But it's insane to think PARENTS will be the ones forking out ridiculous sums of cash to appease their kids. I doubt serious gamers will be the ones paying thousands to be the "first on the block". If, in fact, they're really going for that much.

Also, another distinction...we ALL do jerky things...you, me, everybody...does that make us jerks? I don't think so. It just means sometimes we act like one. I'd like to think my character is determined by who I am as a whole, not by isolated incidents when I have an error of judgment or simply blow it. I mean I looked at these people, and they weren't trying to "stick it" to anyone...supply and demand...supply and demand...seizing opportunity...

I cannot believe I'm defending this....lol...funny to me.

Odd statistic, where do you get this stuff? Have you ever been a contestant on a game show??? Oh, wait, I just read the last sentence.

I am like you... casting stones for days now! So, your post really made me think. Who am I to judge? Thanks for actually talking to them and giving them a "face". Have a great weekend!
Blessings,
Nancy

I still think that if parents are in the mix there doing this for their kid, they should be slapped (not hard...just a little slap!!) Does this mean that they are bad people? No. I don't think that at all...but I do think that it would be setting a bad precedence for the kids' expectations...but that's just my 2 cents!! However, I do think it's very cool to stop and talk to them and get their story!!

WELCOME NANCY:). Yaaaaaeeee, I like it when the wheels are turnin'.

Along these lines...I try not to say that "I'll never do...(fill in the blank)" because for some odd reason, it seems that I will inevitably be put in a situation in which I will!! Oh...and you can always visit Steve's site..in one post he actually has a very crude representation of said part....it's a very funny post too...

Robin, I used to win quite a bit of money and prizes playing trivia at pubs and charity functions. Never been on TV (except the news)

But the reason I remember this gem so well is because at University (where I was a mature age student), the statics lecturer was demonstrating this phenomenon by going around the class and getting everyone's birthday and writing them on the board.

This wouldn't have been a problem except that before we got a match he got to me, who as luck would have it, just happened to be celebrating a birthday that very day.

Needless to say there was much mirth and comments about how old I was, and of course, the obligatory 'happy birthday' song. So I'll probably never forget that piece of info.

Well, Robin - you did something I would have never done - talk to them!!!! Way to go - it sure made for an interesting post and a different way of looking at things.

Claudia, I've eaten so many stinkin' words I could CHOKE on them :/.

WT, lol at "mature age student". I bet you kicked their tails.

Karmyn, I think my kids secretly love this kinda thing about me. Thomas and Rachel told me last night their friends think I'm a "cool mom". Hope they can still say that in 2-3 years!

Well - what can I say - you go through with the things that are on your mind.

But if only 10 units are sold at each retail location, why are more than 10 people in line? Just wondering.

I'm always talking to strangers and making my family nervous.

When I saw how much money they were making per hour - I wasn't sure they were dumby's after all.

Good for you for scratchin that itch

Now THIS is a cute story. Good for you for getting the skinny, and straight from the "lion's mouth." I can't believe there are people willing to do this tho... they must be young and unfettered. :~)

My last post got me wondering....
I saw some crazy people tonight
Mmmm, Mmmm, Good!
"I want you just the way you are..."
Cartoon hearts are floating
Robin-2, Laposaur-1
CHANG-A-LICIOUS!!!
If you had been a fly on the wall during our trip...
24 Hours of Magic...and Then Some
Vindication and Glory