I never thought I'd "get" Jack Kevorkian...

But when you're forced to walk in the shoes of one (or have a family member) who's terminally ill ...in intense pain...or who's living the indignities of not being able to do ANYTHING for themselves anymore, you begin to think perhaps Kevorkian wasn't satan after all. Perhaps he WAS guided (albeit misguided) by a deep concern for the pain--physical, mental and emotional--experienced by those with whom he came into contact. Perhaps his overriding goal wasn't to end life, but to end suffering--not just for the patient himself, but for those whose lives were also inextricably altered. When you're living that kind of life, you find there are NO answers. And so you wait...for the mercy of death...or miracle.

It'll be because he's a sinner...just like me. But unlike me, never seeing his desperate need for a Savior. I am so thankful to be that desperate. 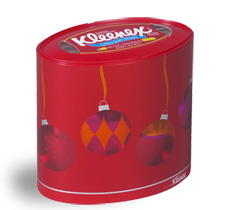 I'm talking Kleenex here, lol. Yep, that's all. Me likey the new boxes this year. Once again proving that StYle over substance will cost you a little more.

I never have liked the "decorative" box covers you can buy to hide your tissues. Seems kinda pointless. When I need to blow my nose, I don't need to hunt for a camouflaged box (that ain't fooling anybody) which blends into the decor. I mean, is a box of tissues really that offensive??

Shifting gears, this reminds me of when I learned the difference between brand names and generic. We were in the grocery store with my father, I guess I was in elementary. He asked me to go get a box of Kleenex. So, I wandered around Winn~Dixie til I found the right aisle, picked up a box and returned to him and our cart. He said, "That's not Kleenex!" and I'm staring at the box wondering WHAT in the world I was holding then. He walked with me back to the tissue aisle, picked up a box of Kleenex-brand tissues and explained the difference (which cracks me up now because in his "old age" he became quite the generic-brand King). I thought another name for "tissues" WAS kleenex. Next item I remember learning that on was bandages (I thought they were ALL called band-aids). And the next thing I recall was tampax versus tampons.

Hmmm, all these are drug store items...wonder if there's any significance there. Probably not.

Anyway, if you saw the pretty boxes of Kleenex this Christmas season and passed

on 'em because they were triple the price, you missed out. It WAS worth the extra. The back of my toilet never looked so pretty.

Ending with a giggle, my favorite way to go :). 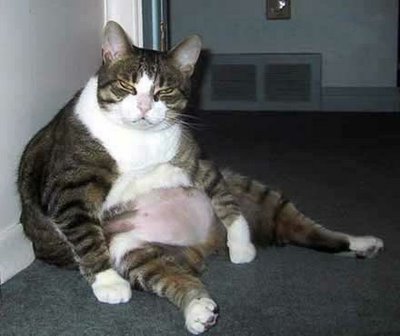 after Easter or Thanksgiving or, more recently, Christmas dinner.

I just hope I don't look like it, too. 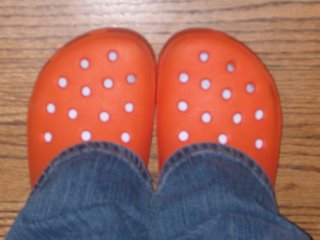 How much do I love it when I wear my very obnoxious Clemson crocs people can't help but notice my feet, and they SMILE?! And I find it utterly hilarious that I find myself looking for orange sweaters & shirts to go with THEM! Planning a wardrobe around a pair of plastic shoes....who would've ever thunk it?

I saw a "croc sister" wearing a pair of hot pinks at my kids' school. The boys were totally morified when I rolled down my window, took off a shoe and waved it at this total stranger. She "got" it, and grinned back.

Ummmm, don't knock 'em 'til you try 'em. They really are comfy and it's nice that something so benign can bring a little fun to your day. Hey, these days I'll take all the smiles I can get.

A MUST-READ for Wives

Ok girls, admit it--how many times have you gotten mad at your husband because he didn't read your mind? You wanted him intuitively just "to know" what you were thinking, because by his actions, you realized not only was he not on the right page, he wasn't even reading the same book (uh, he was probably watching the movie version instead)(yep...gender stereotyping at it's finest!).

Since I've been married soooooooo long now (happy 18th in November), it's been a while since I expected? hoped? Tad could read my mind.

The funny thing is, when I read this book, I was blown away...I realized how often I had flat missed reading HIS mind! Gee, and I thought I knew something about guys...my own hubby.

Run--don't walk--and buy or borrow a copy of this today. Then TALK to your husband about it. I promise, it'll be the basis for many GREAT conversations!

Oh, yeah, there's a version for guys coming out next Spring (THEN they'll have a new tool to help read your mind).

......cause my kids are at school and there is no one here to lick the beaters (or "batters" which Stephen calls 'em, which actually, is more accurate)--or the bowl or the spatula--from the cream cheese pound cake I just put in the oven.

AND, might I add, it's just not as much fun since I'm not listening to them argue over who gets what...or seeing their faces covered in batter (and their shirts, too).

Wow.......I just got a glimpse of life as an empty nester (which is STILL years away for me). Think I'll have to rent a few kids when mine are up and outta here when I'm baking. I much rather have a cake that's 10% smaller.

Hmmmmm, or, I could just make sure I cook when Tad's around.

Hey y'all...come on over for a visit!
It might sound hokey, but...
Do you really want to see this????????
For those who missed this the last time it went ar...
Blogging Chicks Carnival Time
For Michelle and Chaz...
A room with a view
WHAT ARE YOU WAITING FOR???
Mixed up?
Because I said so, that's why!