(The dating years, 1983)
...Billy Joel, ballading mid-song, was just at that line when Tad cranked up his 1986 burgandy Honda Accord. It's at that precise moment he asked me to get something for him out of the glove compartment, I swear, almost on cue. I popped it open and saw an open ring box and thought, hesitantly, "Oops! He doesn't want me to see that..." And my head at mock speed boomeranged a shocked glance at him, then back at The Box and I wasn't sure what the proper social graces were for accidentally discovering an engagement ring. I couldn't exactly pretend I didn't see it since it was on top of everything else. All this hesitation in a matter of seconds, felt much more like an eternity.

And then The Question--

Not exactly the one I had imagined since I was six years old reading stories that ALWAYS ended in "happily ever after" I was looking for. I suppose it was warrented, however; this WAS the second time he proposed after all. The first time was a year or so earlier, a much more "traditional" proposal (professing his undying love and affection and how he wanted to spend the rest of his life with me, yada yada). At the time, I was conflicted--I couldn't exactly say "yes" because I took marriage that seriously, a commitment for life, but I didn't wanna say "no"...so we remained in engagement purgatory for about a week. I wore the ring for fun while I contemplated my decision, but when all was said and done, I could only say "Not yet." He took the ring back, and let's just say for the next year he made me pay for my indecision--painfully so--by dating other women we evaluated whether or not to stay together.

As you can see, his question was certainly understandable. I still remember what I was wearing, in fact, I just got rid of it in the past few years. I become emotionally attached to old clothes and have been known to keep a garment well beyond its natural life because of undue affection. I tried to find a picture from that night, but my pictures are discombobulated, I have GOT to organize them before I die.

By the time Billy got t 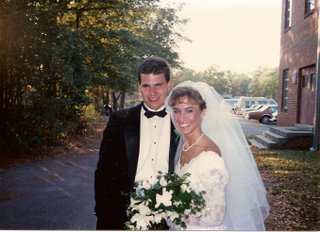 o "I love you and that's forever And this I promise from the heart I could not love you any better I love you just the way you are" I had said yes! Three and a half months later, we were married (dated five years, when you've got your dress (my sister's), it really doesn't take that long to pull off a wedding).

A long damn time. And if there's ANY question, I am most assuredly smiling when I write that.

I cannot remember what life was like before Tad. We've been together over half our lives. He is strong where I am weak, and our personalities complete each other's; a good thing, although not without working through some differences at times. We've had emotional highs and learned that sometimes "love" is spelled "c-o-m-m-i-t-m-e-n-t" when feelings eluded.

And if I knew "then" what I know now, my answer would still be the same, the second time he asked, not the first.

I love you, baby...happy anniversary :).

Two of my favorite "kid" pictures--we were both three in these shots.
Gosh, he's cute!
Below, this past summer, and gosh, he's STILL cute.
Love MY blue-eyed brunette:)!! 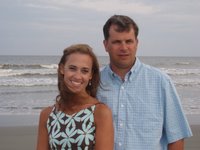 Sweet story and i have to say from what I can see of your wedding dress, it's gorgeous. It makes me lament the fact that very few dresses have sleeves anymore, most of them are strapless! Is it possible to see a photo of another angle (or full view) of the dress?

So THAT's the face that goes with those toe. -=) Lovely on both ends.

Congrats! Love to hear of people making it work.

I was formulating a comment along the lines of "geez, what a romantic guy!" as I was reading, then I got to the bit that said it was the second time he proposed and it changed to "what a bitch". But you know I don't really mean that ;)

Now for some mathematical pedantry, there are actually 247 months, not 228 as there are thirteen groups of four weeks (commonly called a month) in a year as opposed to the twelve named calendar months.

And coincidentally, this year I have been married for exactly half my life.

Thanks, Sally :). I CANNOT WAIT 'TIL NEXT YEAR!! My wedding dress has been preserved (in a specially sealed box) since right after we got married. I am busting the seal and plan on wearing it the entire week of our anniversary. I'd better not croak before then or I'm gonna be pretty mad (lol). Ummm, I'll work on a picture for ya :).

Vicki, don't think I've EVER had that thought (or compliment) before, so thanks for an original!

WT, more grins :)... At least I was SWEET about it, shucks, I just needed to be sure. And don't worry...he ended up with quite the upper hand. Thanks for clearing up my calendar and math ineptitude (ahem). Very cool on your married-half-your-life thing. Can you imagine when it becomes 3/4???

You two were and are a very cute couple! Does it feel like 19 years or have you just been together so long that you just can't remember a time without each other?

Yes - the proposal was pretty unromantic (mine was similar - I don't think He put a knee down. He was sitting on the couch).

Congrats again to a WONDERFUL woman and her CUTIE husband!!!

Happy Anniversary!
Thanx for sharing the "how it happened"
I hope you recount that for your kids, even if/ when they get to the "eww-mushy-tmi-gross-notmyparents!" stage ;)

Ohhhhhhhhh, so sweet. I'm glad I stopped by. (Looking for a previous post to link to... I'll leave it a mystery.) What a wonderful story of your engagement! I can see how "yous twos" are purrrfect for each other. Thanks for the pics. You're gorgeous!!!

I actually had two proposals too... different guys though. I said yes to the latter, but not the former--we were in high school at the time!

Maybe you don't have anything wrong with your inner ear.
Maybe your are just dizzy in love.
STILL!

That's a great story :) I can still remember when I proposed. I had to get a root cleaning on my teeth and they advised me that I would remain numb into the evening if I proceeded. So I had to go through the procedure without any Novocaine. Ouch!

Happy Anniversary! Thanks for sharing. That's a sweet story!

My dress is sealed too! Once in awhile I wonder if it's my whole dress or just parts of it that I can see from the front;)

Gorgeous couple! I'm glad you made it through the awkward question-popping;)

I know what you mean about not remembering what life was like before him. Wierd, isn't it? A lifetime ago.

You never fail to give me goosebumps. (And I haven't shaved the old legs in.... a while. So it was rather painful).

That was a compliment, really. And a reminder to myself to shave those legs.

What a great story! Happy Anniversary you two.

Congratulations. You came back to eachother despite trials of uncertainty and doubt and discovered you had what it takes to make for a good, lasting marriage. Sometimes persistence only prolongs what wasn't meant to be, but in your case it was the course well worth staying.

Aww, Happy Anniversary! You are blessed.

My dress is also sealed in a box, with a see-through front. Not sure I'll ever fit into it again!

Welcome to Yvonne & Kila, PENSIEVE newbies! Thanks for your greetings:) and anniversary well wishes (everyone).

Karmyn, for the most part, NO, it seems more like 5 minutes! When the heck did I hit mid-40s and have a kid less than a year away from driving? In my mind, I'm early 30s, sometimes even 20s. The rest of me doesn't seem to know that, though (lol). After reading your comment, I wish I had ASKED in my original post for readers to tell me THEIR engagement stories...I might do that tomorrow anyway. (I'm sure Tad loved reading your sweet compliment;) ).

LCO, great point! My kids LOVE to hear our "stories"...this one is definitely one they NEED to know (I'm trying to remember now if they already know it)(they will when they read...and I'll get in trouble for the "d" word:/).

Pamela, y e a h, THAT'S it! (got two more doc referrals today...now I just have to actually call 'em).

Mike, if that ain't love, I don't know what is. I woulda been drooling while I proposed (giggles).

Melissa, I wonder the SAME thing...will mine be in tatters when I open it?? Stay tuned....!

Marnie, I love you (and that was before I saw Narnie's boob shot ;) ).

What a beautiful tribute to your man! Loved it! :)

Thank you for sharing your story. It is wonderful to see others to be as happy (or more) as when they met. You two make a beautiful couple.
Again - happy belated anniversary.

Cartoon hearts are floating
Robin-2, Laposaur-1
CHANG-A-LICIOUS!!!
If you had been a fly on the wall during our trip...
24 Hours of Magic...and Then Some
Vindication and Glory
Will I EVER Write About Our Beach & Disney Trip?
Blogging Chicks Carnival Time
Surprise a "friend" of mine....
You Move, You Lose