It's Not Easy Being Green 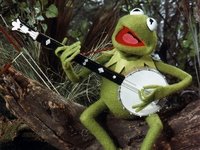 A few weeks ago, I wrote one of those Five Things You Probably Don't Know About Me posts. In it, I confessed with my tail between my legs admitted to not being a re-cycler and feeling guilty about it. We don't have curbside pick-up, anything we did would require effort, and although I'm not proud to admit it, the path of least resistance won out. We've done nothing...outside of me helping each one of my children construct some type of re-cycling class project over the past five years, which produced more mother-guilt, and I think, did more harm than good.

What do I mean by this? Lip service...hypocrisy...not reinforcing at home what was taught in the classroom. In matters of faith, this breeds a false and shallow religion which serves neither God nor man. In matters of life, this breeds a dangerous sort of duplicity, expousing a set of values where there's no substance or action to support them. If I agree with or believe what's being taught in the classroom, it's my role as a parent to reinforce it, to support it; I guess if I don't agree with it, to explain an alternate point of view and why I think differently. As my older children have entered middle school, I've encouraged their freedom to challenge and question subjective material; not to accept opinion as fact. It's family lore that my grandfather used to say "Don't believe anything you read or hear and only half of what you see" and my children are beginning to understand what I (he) mean by that.

The older I get, the more I appreciate the beauty of creation...the better I understand my role in its stewardship...the more clearly I see the ripple effect of my actions, not just relative to environment, but also to people. For the next 4-8 years, my best opportunity for changing the world is through my influence on my own children. If I "change" them, I'm changing the world. And I think this change begins with ME.

In the comments section of my "Five Things..." post, Swampwitch had this to say:

And that's where change began with me. A fellow blogger throws down the gauntlet, and all of a sudden I'm "in" (but NOT like Flynn...or Flint;) ). And so begins SPEAR 2007--Swampy's and Pensieve's Excellent Adventure in Recycling.
Doing anything with the illustrious Swampwitch will be an adventure...just learning to translate her globberisms has been daunting. Here's her first post about our challenge; be sure to read this to get a better idea of who I'm in cahoots with! She's a hoot!

We're starting SPEAR 2007 early, because heaven forbid if it was a New Year's Resolution--THOSE are made to be BROKEN! Our goal is longer-term, lifestyle change, to become more aware of our action AND inaction, and to understand how both affect others. If you're already "green", thanks for doing your part to take care of Planet Earth. Share your tips and ideas (here and at Swampy's). Encourage us. Hold us accountable, and if necessary, smack us around;) If you've not yet hopped on the bandwagon, there's plenty of room to join us! Recycling is kind of like dieting or exercise--much more fun with a friend :).

So what are you waiting for? Prizes will be awarded. And there will be LOTS of winners :D.

Oh, let me be first...if I may. Thanks for reminding me of that comment. I did "throw-out" that challenge, didn't I. (Throw-out...huh,huh,huh...get it? as in "throw out" the trash !)
Anyway, it looks as those I'm first, but if not, close to the top of the (trash) barrel...oh no, did I say that, too? Stay tuned. I'm recyling kids on my next post. Pimping your blog, as usual. And by the way, great post. Next to theHansMan, Kermit is my favorite green man.

We've been recycling for 15 years now, and I can tell you that like all habits, after a while you don't even know you're doing it.

I guess my best advice is to start the process at the instant an object becomes trash. Don't pile things up and think you'll sort them later, that's just making work.

When you throw something out, it's just as easy to throw it into a bin where everything is already the same. The most common upper level sorts are: glass, p.e.t plastic, aluminum and paper(and cardboard) so that's really only four bins you're talking, and the newspapers go straight into a box when you've read them.

You should see if there are any groups trying to raise funds by recycling, that way you can get them to come pick up your stuff. (usually cans)

Oh Jeez, I keep forgetting to ask: How's your Dad?

Wow, WT! I can't top all of that advice.

We used to be so regimented about recycling. I'm embarrassed to admit that we've slacked in our recycling since we moved into this house. Every time my husband takes the garbage to the dump, he expresses his guilt about our failure to recycle like we should.

So, that being said:

I, Susan in Va, do hereby agree to take part in SPEAR 2007. And that's the truth, the whole truth, and nothing but the truth, etc.

We don't have curbside pick-up, either.

A local teenager started a service where, for a given amount each month (discounted if you pay for a full year at once) he will come by once/week and pick up your recycling stuff and take it to the local recycling center for you. He started this in middle school (with his mom driving) and now has his own car. I have no clue what will happen once he graduates, but I'm hoping one of his three younger brothers will take over.

Because I'm too lazy to drive the 2 miles down the road to the recycling center myself? Uh, actually I think the kid's entrepeneurial spirit should be supported and encouraged. Yeah, that's it.

Robin...since you don't have curbside pickup like Swampy does, try to find a recycling center close to home and see how they sort. Some places will have you put glass and plastic together, others will have it separate...things like that and make your bins accordingly, like Willow said, it's easier to just have it there and ready. Just look at it as doing your part not only to teach your kids but also to help protect them and where they live!

I'm going to increase my recycling efforts, too.

Swampy, ha! You're green AND punny! Keep slingin' that mud, will ya?

WT, when I least expect it, you're N I C E to me (not that you're ever "mean", I just mean, no sharp, sarcastic remarks about me/us being a slacker). Thanks for the suggestions... Funny, I've taken that approach (not always successfully) with mail/bills/etc. but never with the items you mentioned. I'm not trying to build Rome in a day, but a way of life over time. The GOOD thing is everyone's in agreement (which I never thought would take place, that the interest would be there). Plus, Swampy's on my tail, not to mention the rest of my Kermie-nistas;).

Thanks for asking about my father...short answer is close to the same...long answer would be...long :/.

Ooooo, Susan, you sound so official...we need sidebar bling or something. Hey, I'm gonna ask Mert for some help! She's good at that!! Now, while Swampy's on my tail, I'll be on yours ;).

Carol--KUDOS to that kid who helps you out! LURVE his initiative. It gives me ideas for my OWN kids. I mean, there are 80? 100? houses in our neighborhood...My boys could make flyers and start small, like maybe cans only, or cans and plastics. I'll let you know. But no matter what WE do, I'm S U R E you're just supporting this guy because his innovation deserves acknowledgment...and your cash...;).

Claudia, You're dead on. I want this to be a way of life for them, so it'll be like WT said, something they don't even think about.

Ok, so what's worse: to not recycle because it's a hassle, or to recycle, but not because you give a damn about the environment. Not that I don't care, entirely. But, well, that's not why I do it. It's free to recycle here, easy, and garbage bags cost $1 a pop. I recycle because I can save about a buck a week. Landfills? Toxic runoff? Ah, what's that to me? Or do the ends justify the ... uh ... motivations?

(But hey, I do use cloth diapers! But, not for ecological reasons.)

when you make a can of soup - rinse it out and immediately toss it into the bin. When you empty the box of cereal, take a moment to flatten the box on your way to the bin. When you finish that bottle of wine - give it a quick rinse and then carefully drop it in the bin.

Pretty soon - it won't seem like any extra steps at all.

KARMYNR: Why does one need to rinse the bottle of wine? There's never a drop left in it. Hiccup. <:O

I am ashamed to admit that I have curbside and don't recycle. :/ We are just lazy. I have recently freed up several laundry baskets, LOL, maybe I could use those in my garage. I have curbside bins, but they are on the small side.

I will help in any way I can with some side bar bling, I emailed ya!

I am ashamed to admit that I have curbside and don't recycle. :/ We are just lazy. I have recently freed up several laundry baskets, LOL, maybe I could use those in my garage. I have curbside bins, but they are on the small side.

I will help in any way I can with some side bar bling, I emailed ya!

Congrats on the SPEAR 2007!
So proud of you.
Get the bins on wheels & you won't be able to complain about heavy bins.
Food scraps can go in the compost bin, to be decomposed & provide healthy dirt for your plants. Check with the city, sometimes, they let you put food scraps in the green waste bin.

A Barrel of Laughs
It was SUPPOSED to be a SLEEPOVER...
I'm a thief...
Tagged--Six Weird Things About Me
"Do I look fat in these..."
Time Flies at the Speed of a Bell X-1
Randomries
Wrong Wrong Wrong
Blind Date
Huh?