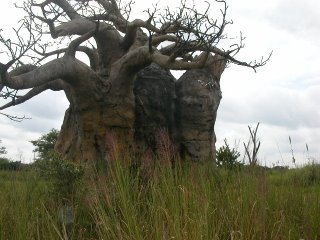 Three weeks post Disney World, it's interesting to see the things that stuck with me.

Take this ABSOLUTELY LAME picture to our left. In case you're wondering (which I highly suspect you are NOT), it's a Baobab tree. These are also known as monkey bread trees or colloquially as "upside-down trees" (from the Arabic legend which claims that the devil pulled out the tree and planted it upside down). Yes, I've already told you more than you'd care to know, but it's important for you to hear the pain rage contempt frustration defeat in my voice as you read that sentence. Our NEW camera was working only when I wanted to photograph stranger's feet or gum on the sidewalk, while our OLD camera's battery managed to die every time I had a great shot of our family, a strolling character or fabuloso attraction lined up. So I'm left with things like a freakin' upside down tree seen on safari at the Animal Kingdom. Nooooo, I couldn't get the pictures of lions and tigers and bears (oh, my!), but junk like this?? Load 'em up. (Actually, I did think these were pretty cool, but suffice it to say, I don't think "Disney" when I see it :/.)

There are hundreds of numbers I could throw at you relative to our trip to Florida's coast and "all things Mouse", here are just a few:
24 Approximate hours spent in the car from Sunday morning-Thursday night.
24 Exact hours spend in the parks
1,500 Approximate miles traveled
82 How many times Stephen asked some variation of "Are we almost there?"
5 Hours on the beach. About a thousand too few
45 Minutes. About how long I boogie boarded. Big waves, one of the roughest surfs I’ve ever experienced. Probably not safe, but absolutely, positively wonderful!
4 Number of Disney theme parks visited, 3 each day
19 Miles walked each day. Okay, who really knows this number? Wearing Birkenstocks definitely worked on the old calf muscles, I wish they looked as good as how sore they were. Amazed our kids DID NOT complain, they were troopers.
46 Seconds. How fast the kids fell asleep in the car after getting up at 6:30 a.m. the first day, and going HARD until the fireworks were extinguished that night. We let ‘em sleep in Day Two. Somehow we still managed 12 hours of Magic.
$$$ Tickets. You could feed a third world country for a year for what it costs a family of five to spend a day at Disney. Yeah, I’m conflicted on this one.
17 How many times Tad or I said “Don’t y’all wanna watch a movie?” to the kids on the drive down and back. I don’t get it. When I was a kid, THIS was the kind of thing I never dreamed would be a possibility in my lifetime. Go figure….
3 Number of movies they actually watched
3,000 The number of junk-food calories consumed per family member, per day.
30 The number of nutritious calories consumed per family member, per day.

So, do we get to see any pictures? (yes I did read the post, I'm just being a smartass).

I read up on blogger and they say there's no post limit. You may find that the dropdown menu dynamically changes when you hit 300.

I am so enlightened.
I mean, I never knew about Baobab Trees. Such fascinating information, and yet, I have managed to survive without it for decades.

Have you read The Little Prince? He talks a bit about baobab trees...

(The tree was there when I looked earlier. I can't see it right at this moment.)


I meant to tell you the other day that I have finally grown accustomed to your new Pensieve.
I always liked the colors and design - but I needed to start associating it with you. And now it's you.

I'm a DW freak and I now admit that freely. I'm always interested in what others think or do when it comes to DW.

I like the tree. It is very African and I can envision what it must be like to Safari there.

oh - and i read somewhere that you don't start losing posts until you've reached 999.

WT, I am posting what I've got...sad, huh? I looked a bit further and found what Karmyn said @ 999. I'm looking into other venues, but that takes time...and time has been scarce lately (computer time, that is :/ she says with a few tears).

LCO, YOU'RE WELCOME she says with equal "sincerity" ;).

Claudia, Didn't I read that a thousand years ago? But I can remember nothing...you've aroused my curiosity....

Pamela, I'm experimenting with some "stuff", that's why things are coming and going (not b/c you're losing your mind). I haven't been able to just park it "here" lately, so that's why things sometimes seem mixed up... (no further comments, please:) ).


Karmyn, somehow I just KNOW I'd love to go on Safari with you...you'd be the one with the gun (running and hiding when push came to shove ;) ).

Love this list - Very telling, isn't it?? The first time we went to Disney world, we just wished we would have spent more time at the beach. So the next time we went, we just tacked the DW visit at the END of a week at the beach (much better!!!)

Honestly, our idea of a vacation, is feet up on the balcony, staring at the ocean, consuming at least a bottle of wine per day. The kids always seem totally content with that vacation too - sand digging, pool jumping, play.

So we gain weight that week, while the kids remain bean poles;)

It sounds like you had a fantastic time. I can't wait until Bug and B can go and enjoy it. Of course, we might have to rent them out as housekeepers and dishwashers to pay for it!

Love the tree! We saw a bunch (of these?) tipped over in Coral Gables (Florida) right after Katrina. Scary.

Vindication and Glory
Will I EVER Write About Our Beach & Disney Trip?
Blogging Chicks Carnival Time
Surprise a "friend" of mine....
You Move, You Lose
Someone forgot to tell me I'm a black man
Unexpected Gifts (I wasn't finished...)
Waaaaayyyyy too cool!
Unexpected Gifts
Do you want someone to tell you if...