Saturday was the last day of fall sports for our family. Because the previous weekend was a total washout, we had make up games. Stephen (yellow shirt below) had two soccer games instead of the scheduled one (9:30 a.m. & 2:30 p.m.); by the time the last whistle blew, he had scored a total of five goals for the day...quite a "feet" of accomplishment, great punctuation to a season that thankfully saw week-to-week improvement. 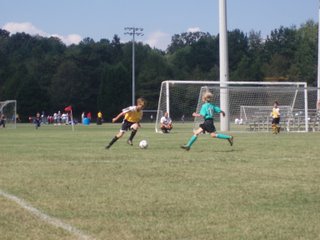 In between, Thomas had a noon "pick-up" football game (The "official season" was over). In spite of it being more a scrimmage than a game, he was FIRED UP because it was the only one they got to play on our school's campus since sixth grade is still played through the Y (none of his games were "home" games). Thomas had to leave his first basketball practice early in order to make his game--he's still in the "I can play everything" age of adolescence.

So, yeah, if you noticed game times, we were on the road all day long, Rachel in tow, dutifully playing the cheerleading big sis.

Thomas' football game started late, so it ran late, and Tad left early with Rach and Stephen to get to the second soccer match of the day. I was left behind to watch the ending of Thomas' game.

I cannot tell you just how important that proved to be.

He scored a touchdown in their only win of the season. His first ever. 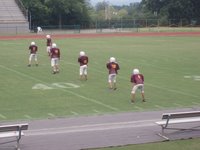 Starting with a wobbly pitchout, he ran his heart out for 60 yards, his eyes never leaving the prize--the coveted endzone which had managed to elude his grasp all season. When I realized that was MY BABY him on the fly, my heart started racing. As he met each yard marker, my adrenaline coursed in sync with his. My mind loudly but silently pleaded a kind of soul-bartering prayer, a mother-hymn which must amuse the ears of God and cause Satan anxiously, greedily to roll fist in hand..."Please let him make it...PLEASE LET HIM MAKE IT!"

My heart exploded, but not from "mother pride", nothing like that. I knew what this meant to Thomas. It meant everything to him. It mattered too much. He's a classic middle child if there is such a thing. To say he loves/adores/relishes being the center of attention, is an understatement. For a moment, he measured up to the Legend that Lives in His Mind. Perhaps the most precious thing about it, was his friends' reaction. THEY were just as happy for him as I was, as he was himself. They know. Kids "know" whether they realize it or not.

It was a fantastic game for all the guys. For some reason, everyone had "a moment". The "stars" of their team stepped aside to share the glory. They had nothing to lose so they played with unbridled spirit--after all, their season was officially over, why not try something "new" for fun?

But when the Fat Lady finally sang, it was one heckuva winning number :).

Bigtime Postscript: Glad he had this glorious moment on Saturday, today is the day he bade farewell to four MORE babies. Let's just say I waited as long as I could because, although I feel his elation when he's on a "high", I feel his pain when he's on a low (he's sure we ALL feel his passion, good, bad or ugly!). He's hurtin' right now :(, but I'm sure in a few hours, all will be good :/.

You tell Thomas that not only am I excited for him but I am SOOOOOOO proud of him!

You are one busy lady. although I am not much of a football fan, I was right there with ya on the anticipation and exhiliration! Way to go for Thomas!

Congratulations! What a champion!
I'm glad he played with all his heart!

So sorry about the teeth :(

I am so proud of Thomas. He IS a star in my book. All that he thinks of himself is true. You have to believe it, if it is to be. How is that for philosophy?

I think you described that feeling so well. When your kid does something they're proud of.

There's this fine, but important line, between our pride, and our genuine happiness about their own.

Sniff, sniff. I feel your joy AND pain. This was a goody. A well told story, as usual. :~)

Oh, wow! I could feel the excitement from here. I posted a bit today about football season at our house. I totally know the feeling of being the mom in the bleachers, heart in throat, a prayer escaping through clenched jaw.

I can imagine your excitement! Fantastic!

Okay, guys, I just let Thomas read this...I watched him read 'cause I wasn't sure what his response would be. But...thankfully, he said, "I liked this post, thanks for writing it." THEN he read what Y'ALL wrote and said, "Your friends are nice...they're cool." So there ya go, words from T, and they're good ones :). BTW, he's been imitating Bugs Bunny for fun (since he only has his two front top teeth at the moment, and going for laughs rather than sympathy...he seems to know intuitively, "Laugh and the world laughs with you....").

Thanks to all of you for your thoughts......they always mean more than I letcha know...truly.

Will I EVER Write About Our Beach & Disney Trip?
Blogging Chicks Carnival Time
Surprise a "friend" of mine....
You Move, You Lose
Someone forgot to tell me I'm a black man
Unexpected Gifts (I wasn't finished...)
Waaaaayyyyy too cool!
Unexpected Gifts
Do you want someone to tell you if...
White and Nerdy